Home prices and home sales both showed strong annual growth during the third quarter, according to the latest report by the National Association of Realtors.  The national median existing single-family home price jumped 7.6 percent from a year ago, to $186,100 -- the strongest year-over-year increase for any quarter since first-quarter 2006, when prices were up 9.4 percent from the previous year.  As an economist, you must love that info.  As a consumer, along with dwindling inventory, that can be bad news.

Sales of existing homes  rose 10.3 percent during the third quarter, to a seasonally adjusted annual rate of 4.68 million, up from 4.25 million a year ago.  Median prices posted annual gains in 120 of 149 metros tracked, up from 110 metros showing gains in the second quarter of 2012 and 39 metros with price appreciation during the third quarter of 2011.

Inventory of existing homes for sale was down 20 percent from a year ago, to 2.32 million. The combination of rising prices and tight inventory on a quarterly basis indicate that the housing recovery is settling in, said Lawrence Yun, NAR's chief economist, in a statement.  "We expect fairly normal appreciation patterns in 2013, but there is a risk of price acceleration if builders are unable to meet the needs of our growing population and household formation... The modest decline in first-time buyers and investors shows the impact of limited inventory in the lower price ranges from a shrinking share of distressed homes, which are popular with both groups" Yun said.

Perhaps this is the time the REO holders have been awaiting - when demand so far outstrips supply they can actually minimize the enormous losses incurred during the burst.  If so, we may see supply eek out to bank-owned listings and support of the market without sacrificing their roi.  That aspect seems to be minimized by many market observers right now.

While NAR attributed some of the price gain to a reduction in the percentage of distressed home sales -- only 23 percent of existing homes sold in second-quarter 2012, down 30 percent from a year previous -- the trade group stated that "higher prices significantly reflect a market recovery."

Housing affordability numbers also fared well for the housing market. With a third-quarter national median family income of $61,700, NAR calculated that with a 5 percent down payment, a household would need only $40,900 to afford a home at the third-quarter national median price, assuming a 4 percent mortgage interest rate and 25 percent of gross income devoted to mortgage principal and interest. That home affordability income threshold drops as the down payment percentage rises.  The proportion of first-time buyers didn't change in the third quarter from last year, but held steady at 32 percent, nearly twice the 17 percent share of investors who purchased homes in the quarter.

The share of all-cash buyers was down on a yearly basis in the third quarter to 27 percent from 29 percent in third quarter 2011. 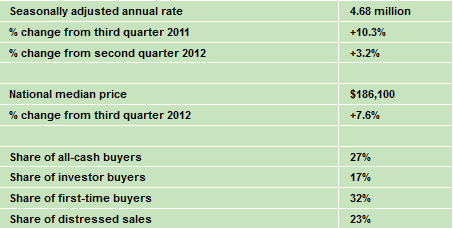 It certainly looks like we are on a path better suited to our work ethic now.